Do Sperm Have Brains?

After coming across a video the other day of these tiny little microscopic critters swimming around, it made me wonder if sperm had brains. Now, I’ve never heard of them having brains but since they kinda look like tadpoles and swim like tadpoles, which do have brains, I thought maybe… just maybe … they might.

OK, so I was stupid for thinking that sperm had brains – Of course they don’t! Sperm tend to swim with a kind of auto-pilot instinct, similar to your body knowing when you need to poop I guess. It all happens naturally and automatically unless you’ve had a particularly spicy curry of course, in which case things might pop out unexpectedly.

How many are produced per day?

Anyway, enough about bowel habits, let’s talk more about sperm. Guys produce a lot of them; According to these white-coated boffins, a typical male can produce around 290 million of the little blighters per day – that’s a lot of tadpoles. In fact, men produce about 1500 sperm cells every second of the day and will produce an astonishing 500 billion in an average lifetime.

What do they have instead of brains?

Take a look at the pic below to see what a cross-section of a sperm looks like. It contains lots of medical terms, but you’ll get the gist of it. And no, the dark bits in the head section are not brains, stoopid… 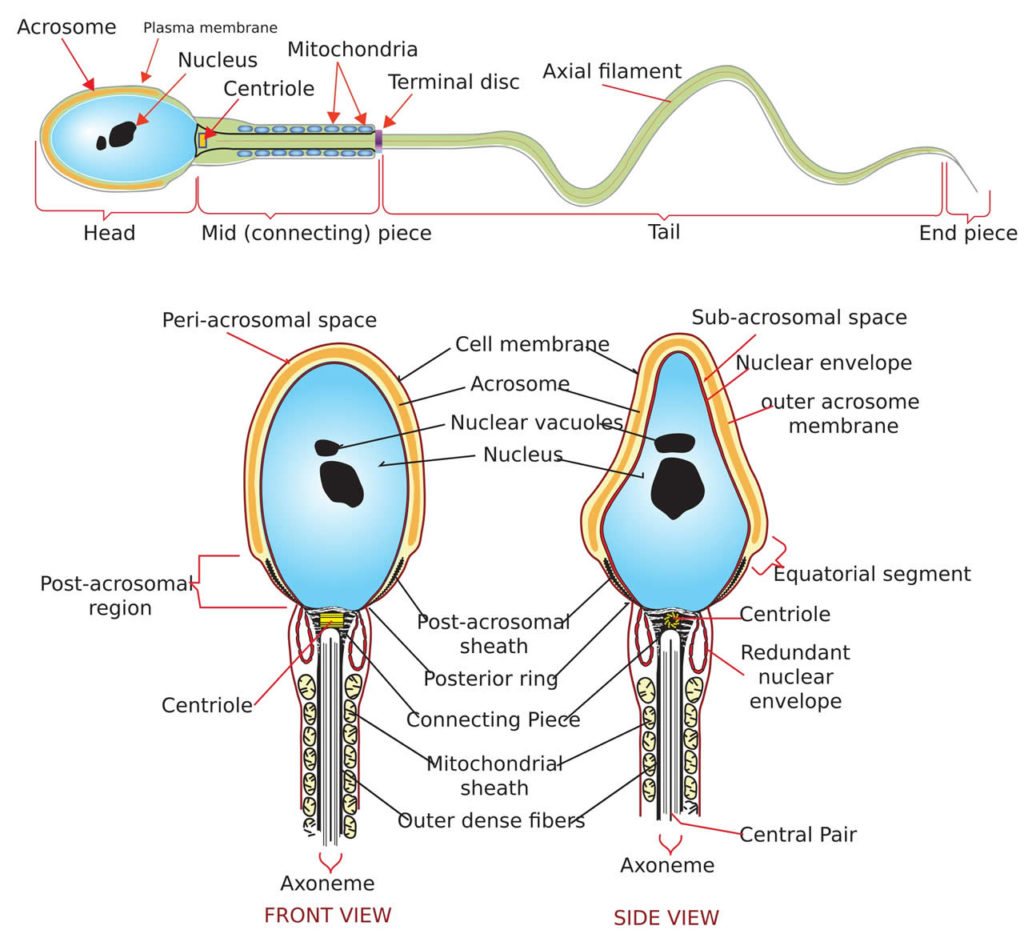 By Mariana Ruiz Villarreal spermatozoa – I did the diagram myself based on the one found on the book “Gray’s anatomy” 36th edition, Williams & Warwick, 1980; and a diagram found of the review “Formation and organization of the mammalian sperm head” from Kiyotaka Toshimori and Chizuro Ito. (Chiba, Japan)., Public Domain, Link

So, if they don’t have brains, how do they manage to swim about like miniature sea life hunting for food? Well, of course, they’re not after food as they don’t have mouths either, they’re in search of that all-important female egg to penetrate, and as you probably know, the winner takes all with no time for the losers (who ultimately meet their demise and perish).

In short, they don’t have anything instead of a brain – So how come they manage to figure out where the egg is in the first place? Well, it’s thought that sperm cells find the egg cell through a couple of mechanisms. Firstly, they instinctively swim toward higher concentrations of molecules released by the egg and secondly, they also head for the high-temperature areas of the woman’s reproductive area that contain the eggs.

How big are sperm cells and how fast can they swim?

Frikkin’ tiny; you can’t see them with the naked eye. According to the guys n gals at the Huff, sperm are around 0.05 millimeters in length, including their long tail. They go on to add that these nippy little cells can travel at about 0.2 metres per hour, or 0.00012 miles per hour (mph), which is pretty good considering how tiny they are.

Rather confusingly, one article claims that sperm consists of 3 main parts, whereas Wiki says 4 different parts. Anyway, if you don’t work in some kind of semen lab, who cares? Suffice it to say, they have a (mouthless and brainless) head, a middle bit that’s used for propulsion, and a long tail. Incidentally, they differ wildly in size between species; e.g. the sperm of some species of fruit fly (Drosophila) are up to 5.8 cm long — about 20 times as long as the fly itself!

Sperm may look and behave like they have brains when you see them swimming, but all scientific boffiny-type people who know about this kind of stuff would slap a wet fish around your face if you claimed that sperm had brains; so don’t.