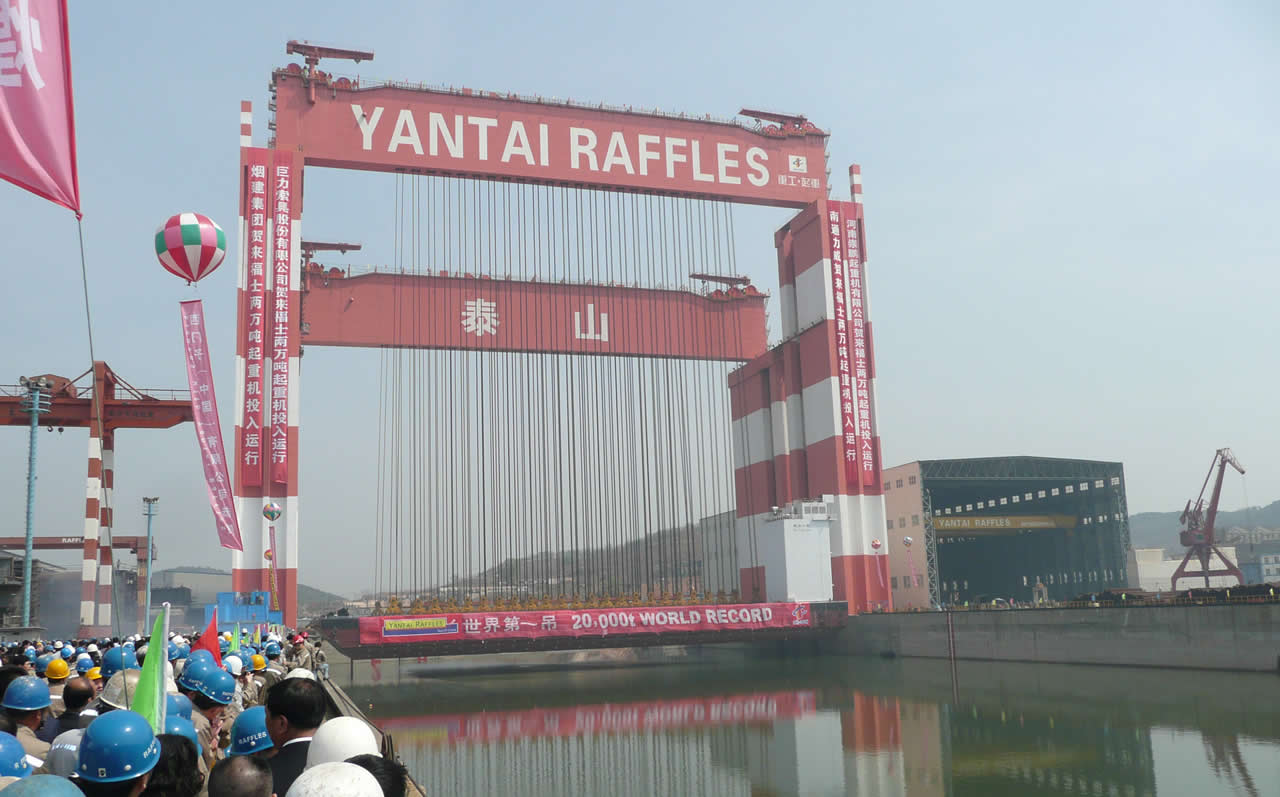 After penning a recent blog about the biggest truck in the world, we couldn’t resist finding out more about heavy-duty cranes and just how much the strongest crane in the world is able to lift.

The clear winner in the Heaviest Crane Lift Ever category turns out to be the ‘Taisun’ crane at Yantai Raffles Shipyard, Yantai, China.

Back on 18th April 2008, it was able to lift a barge ballasted with water with a total weight of 20,133 tonnes (or 44,385,667.25 lbs). It’s no surprise that the barge was dressed for the occasion with a banner which read 20,000t WORLD RECORD to highlight just what was being achieved on that particular sunny April day.

Some 11 years later, the world record still stands and to give you an idea of just how heavy the dead-weight lifted by the Taisun was, here are a few comparisons of how much 20 thousand tonnes actually is:

Hopefully, the above comparisons will give you a fair idea of just how much 20 thousand tonnes actually is; suffice it to say, it’s a lot of elephants!

The general operating purpose of this record-breaking heavy lifter is for the installation of very large modules in semi-submersibles (e.g. offshore drilling rigs) and FPSO (floating production storage and offloading) projects. It’s located at Yantai Raffles Shipyard in Yantai, China and was originally made to install huge integrated modules on top of a vessel’s hull.

Before the Taisun, semi-submersibles or FPSOs tended to be constructed in module form, typically of 1000 to 2000 sections. Because of this, much of the installation work had to be done on board which meant that the efficiency and speed of the project were compromised. Now Taisun is on the scene, the upper and lower parts of the vessel can be constructed at the same time. The net result is way shorter construction man-hours coupled with an improvement in quality and safety. In fact, according to this old article from 2008 on the ‘Offshore’ website, the heavy-duty Taisun crane’s ability to lift 20 thousand tonnes was estimated to save about 2 million man-hours on projects that would normally consist of moving much smaller pieces one at a time.

2008 was definitely a good year for the Taisun crane as it also won the Woelfel Best Mechanical Engineering Achievement Award at the Offshore Technology Conference (OTC) the same year for having a significant impact on the offshore industry.

The heaviest object ever lifted

When reading this article, you may well have got the impression that Taisun holds the world record for the heaviest object ever to be lifted on land but this isn’t the case. In fact, the current record for this was set on 17th October 2011 and stands at an astonishing 23,178 tonnes (51.1 million lbs). The object lifted was part of the North Rankin B Platform and it was raised to a height of 26.5 metres at the Hyundai Heavy Industries shipyard in Ulsan, South Korea. Rather than a crane lift, this was more of a “push-up” whereby 15 push-up towers with extra bracing were used to safely lift the deck.

So, although the heaviest object ever lifted wasn’t carried out by the heavy-duty Taisun crane, it still holds the world record for the heaviest ever crane lift and is the reigning strongman of the crane world in our book.