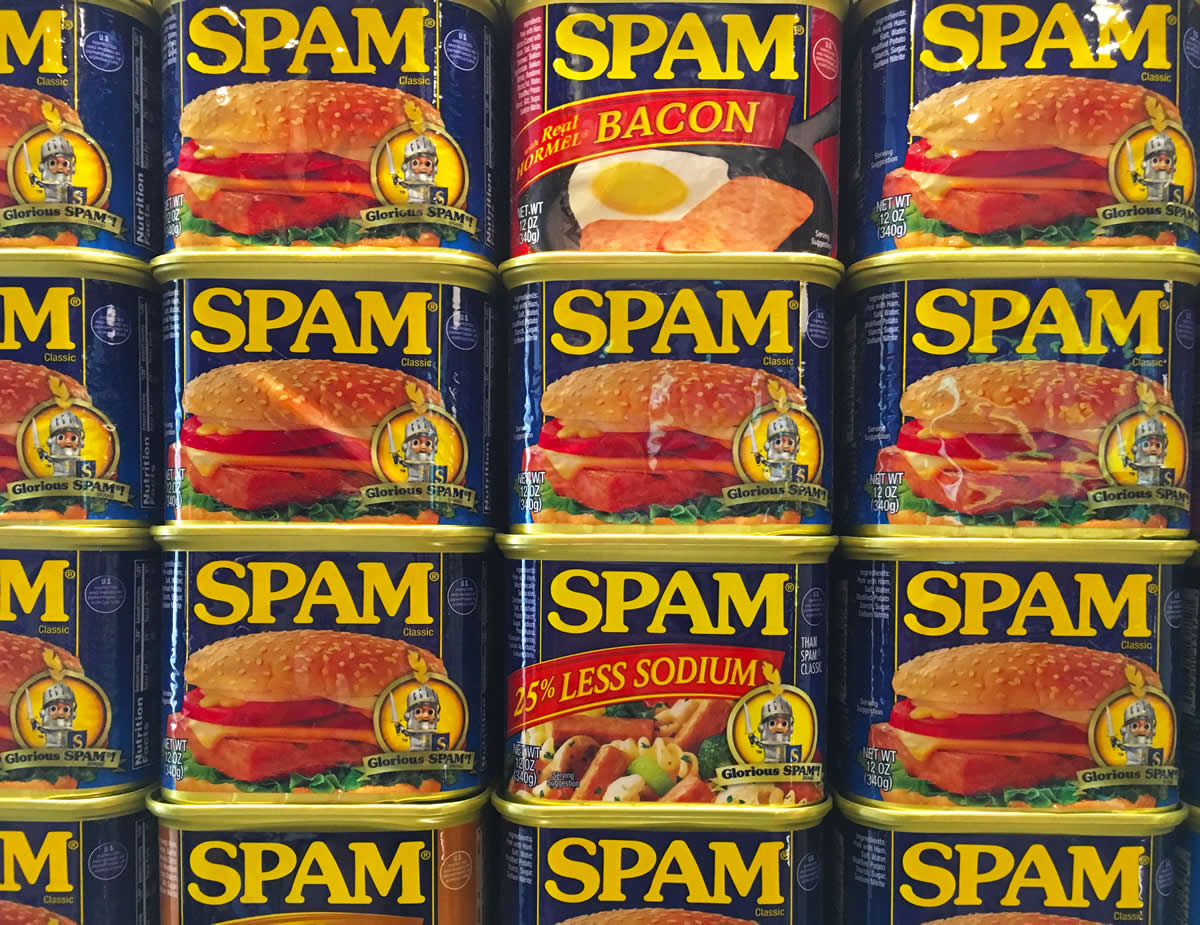 Since this is WordPress, we’ll refer to the URL as the ‘slug’. Who knows why it’s called a slug? Not me.

Anyway, this post is about spam and the WordPress SEO “new kid on the block”, Rank Math, so let’s continue.

Let’s begin with our slug which is, of course,

How close can we get to a 100% perfect score with Rank Math for this post which drones on about spam? Is it even possible if we spam the heck out of?

An H2 containing the word spam

Well, why wouldn’t this heading mention it? If every one of our heading tags mentions spam, then that surely makes it even more spammy. Will this adversely affect our final Rank Math score? I’m not sure.

So this is our main H2 subheading where we once again mention spam. We’re not going to talk about how lovely spam is or isn’t; perhaps we’ll do that later. Anyway, let’s move onto our next heading, the spammy H3.

Our H3 spam heading about two types of the stuff

It wouldn’t be a spammy H3 if it didn’t mention the word spam, which is why we did. So, let’s go into more detail about spam. Firstly, there’s that stuff that comes in a can (which has a capital ‘S’, as in the brand-name “Spam” ) and pretty much everyone knows what that is.

Then there’s the spam that was made famous by the Monty Python crew in their song about spam. In the video below, the crazy crew repeatedly mention the word spam (as you probably already know) and this, so I’m led to believe, is where our third type of spam comes from.

As alluded to in the above video posted on Youtube by the Business Insider, surely everyone who owns a computer or mobile phone knows what email spam is. Pretty much everyone with an email address and an internet connection gets bombarded with spam emails on a daily basis. It is, of course, those emails offering you pills you’ve never heard of, millions of dollars of free money you’ll never see, internet newsletters that you never subscribed to, together with a whole heap of other nefarious spammy subject matter.

Where does the WordPress Rank Math plugin fit into all this spam talk?

The simple answer is to see how well we can rank this page about spam on Rank Math’s SEO percentage score without ringing Rank Math’s ‘Keyword Density’ and ‘Focus Keyword Combination’ bell. I haven’t checked yet so I’m dying to find out when this post is finished. Before we do that, we’ll need some outbound links and some internal ones, so let’s get cracking!

Since we don’t have any other posts on this entire site that mention spam, we’ll have to get as close as we can to a post that is at least in the same ballpark as spam. Maybe there’s one about food? OK, I checked and there wasn’t. Instead, we’ll have to give up on that option and link to this post instead about how good or bad WordPress is when compared to Joomla for SEO.

At least it’s SEO related even though it doesn’t have anything to do with spam. Well, we failed on the spam front but hit the jackpot with that SEO related blog post – It’s fair to say we got 50% of the way there then I guess.

Our next spam heading

Talking about Rank Math, other SEO tools… and NOT spam

It’s nearly time to check our score and find out how we did in our little Rank Math spam test (damn, I said spam despite saying I wouldn’t in the heading above). But first let’s mention two of the other big boys on the block; Yoast and All In One SEO.

Yoast is the granddaddy of them all and was the undisputed leader of WordPress SEO back-in-the-day. All In One was seen as a less cluttered, cleaner alternative and due to this, it gained a good deal of headway.

Recently, however, there’s no doubt that Rank Math is gaining some serious headway. It’s on this website for heaven’s sake, as well as a boat-load of others around the globe.

A final word about our spam featured image – Isn’t it copyright?

The particular image at the top of this article featuring loads of spam IS licenced and it comes from Adobe Stock. Yes, we licenced it. The reason we can use it is that it’s licenced for “editorial use only”.  This presumably means that you can’t use the spam image to promote a product or something like that but instead (according to Adobe), it can be used for editorial content, which is classed as internet web pages that are

Conclusion – Part one: Let’s see how our spammy post faired with Rank Math

OK, so we’ve talked a lot of spam and a fair amount of Rank Math so let’s now publish our post (making sure we have our image ‘alt’ tag containing our keyword in place of course) and see what the result is… 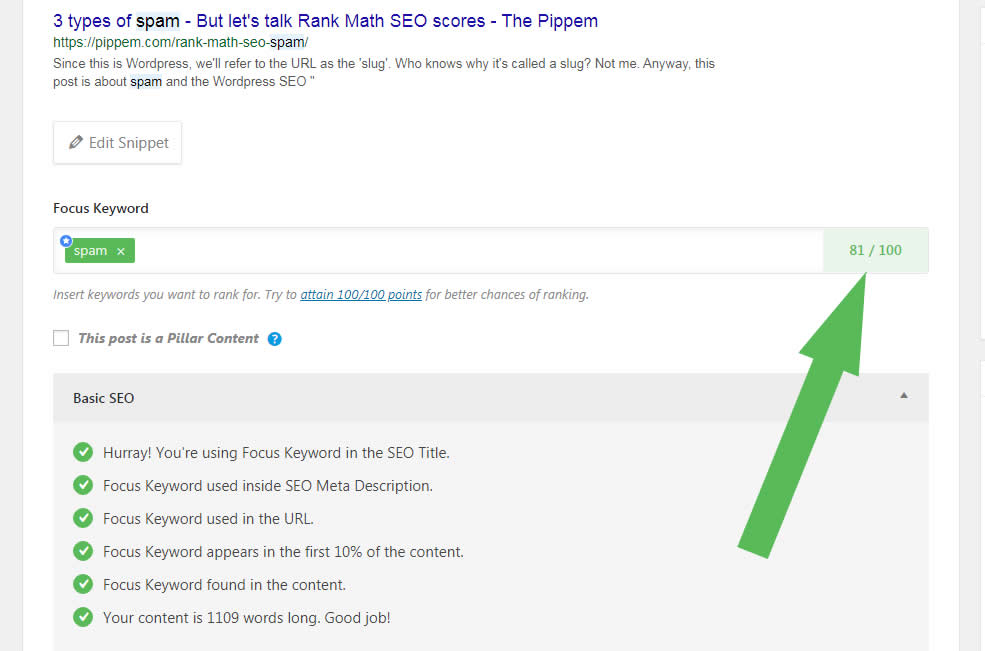 All in all, we did pretty well; an impressive 81 out of 100 which isn’t too bad for following a few of Rank Math’s golden rules. It’s fair to say that we were lacklustre in a few areas such as ‘keyword density’ (which is hardly surprising since we spammed the heck out of the word spam) and we also failed dismally because we’re not using a ‘Table of Contents’ plugin. Finally, we were also not using a ‘power word’ in our title. Oh well.

I suppose we would have scored better if we didn’t mention spam so much and even though we scored pretty well with 81, I guess we’ll just have to wait to see how well we do in search engine result. After all, it doesn’t matter one iota what score Rank Math gives you if no one visits your page.