CRANES BEFORE THE STEAM ERA

At the pinnacle of today’s modern mobile crane design we have obvious examples such as HIAB‘s hydraulic, truck mounted crane; but what about the pre-diesel, pre-hydraulic days? What source of power did they use to lift such heavy loads? Well, according to modern-day scholars, the very first use of cranes can be attributed to the Ancient Greeks.

Back then, even without the availability of fossil fuels, cranes were still widely used in construction projects to lift heavy stone slabs and wooden beams into place. This was typically done using the muscle power of either men or animals but, if a river was nearby, the crane could be powered by a water wheel. Furthermore, if there was sufficient wind, cranes could also be powered by a windmill. This was the case for many centuries until the coming of the Industrial Revolution. when everything radically changed.

During this time, steam-powered engines of all kinds were at the zenith of modern design and technology. Much like the force created when water is pushed from the spout of a kettle, the coal-powered steam cranes of yesteryear used a similar principle to generate the force needed to lift heavy objects. 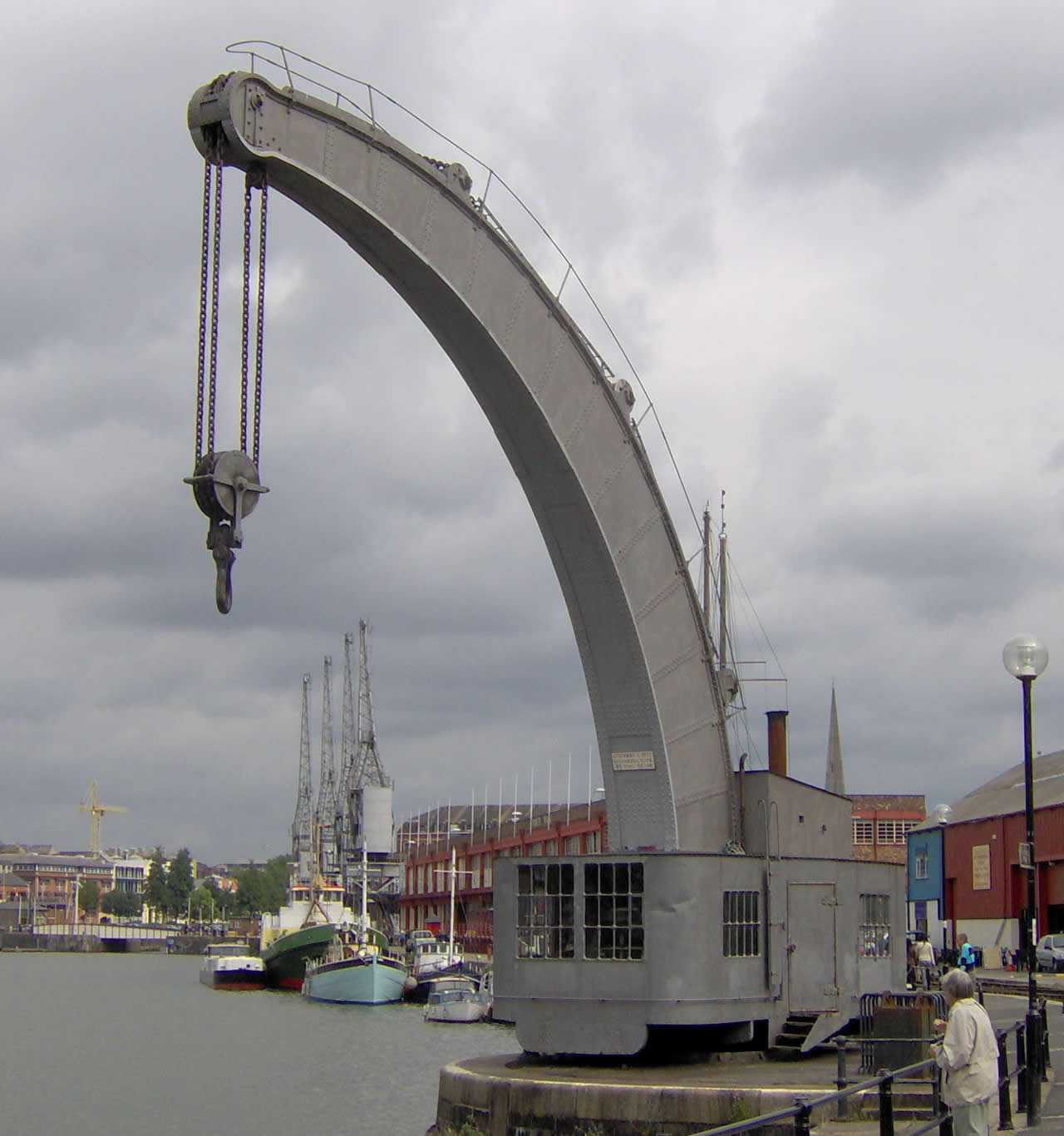 Bristol’s very own Fairbairn Steam Crane is an excellent example of this. It gets its name from Sir William Fairbairn, who patented the design in 1850 and is the only surviving working example of a Fairbairn steam crane left in existence. If you want to see it ‘up close and personal’, it can be found at Bristol Docks on the quayside at Princes Wharf and it’s looked after by Bristol’s M Shed Museum.

Although many of Fairbairn’s cranes were powered by hand and therefore unable to lift very heavy loads, the steam-powered Bristol crane could lift an impressive 35 tons. Prior to this, none of the dock’s 17 other cranes could lift more than 3 tons. This limit on weight capacity was increasingly becoming a problem for Bristol Docks because ship design was changing so rapidly during the 1870s. The Industrial Revolution was in full swing and metal hulled ships were becoming much bigger and their cargos were becoming heavier; if bigger cranes were not commissioned, Bristol Docks would lose out to other competing docks.

Since Bristol Docks had already invested heavily in building a railway line adjacent to the harbour quay, the decision was taken to spend £3,600 on a desperately needed steam crane. So, in 1875, the order was placed and construction commenced. After 3 years, The Fairbairn Steam Crane in Bristol was completed in August of 1878.

You’d think that after spending £3,600 on the crane (which was a considerable amount back then), it would be working flat out and earning its keep every day but this wasn’t the case. For example, in 1890, the Fairbairn Steam Crane only operated for a mere 16 days during the entire year and only made a profit of 11 shillings and sixpence. Even worse, from 1903 to 1909 it only made a total of 143 lifts in 6 years!

WHY WAS IT USED SO LITTLE?

The main problem was the exact same one that led to the banana-shaped Fairbairn Steam Crane being commissioned in the first place – the sheer speed and pace of technology and design. By the time the crane was ready to work, ship size and design had once again made a quantum leap forward. Because of this, the Fairbairn Steam Crane’s limited jib simply couldn’t reach far enough to remove things like a ship’s engine or boiler when it needed repairing, despite being capable of lifting the weight. The Dock owners did consider raising the crane onto a stone tower to extend its reach but by this time, the writing was on the wall. Even as early as 1892, hydraulic cranes began appearing at Bristol Docks and several years later, electric cranes were being installed too. Unfortunately, this was the beginning of the end for the Fairbairn Steam Crane.

Despite the Fairbairn Steam Crane being a dismal failure during most of its working life, it did come into its own during WW2. At this time, a Landing Craft Flotilla Unit was stationed at Bristol Docks’ Princes Wharf and when more than a thousand new landing craft destined for the Middle East were delivered there for adaptation, the Fairbairn Steam Crane finally came into its own – It was used extensively to unload the lorries and launch the completed crafts, making over two thousand lifts in three years.

IS IT STILL IN USE?

Yes. Having been restored to operational condition, it can be seen in all its glory on certain Bank Holidays, special museum days and usually at the Harbour Festival. There’s life in this old steam-dog yet!